A Festival of all things Father Ted is taking place from Friday May 30 to Sunday 1 June 2014.  Daytime entertainment and craic for all the family, and night-time entertainment for adults only. Skip down to previous festivals.

Advance weekend tickets €60 per adult, €30 per child. Saturday tickets are sold out but Sunday tickets may be available at €40 per adult and €20 per child (plus booking fee). All advance ticket purchasers will also receive a fabulous Father Ted Festival gift.

These tickets include ALL events and activities on the relevant days and nights, including the Location Tour and tea and cakes at the Father Ted house.  Night time entertainment (after 9pm) is NOT included in child tickets, but is included in all adult tickets.

Online tickets – and details of all events and activities – are available at http://www.tedtours.com/festival/

Tickets will be available at The Burren Hub in Kilfenora Square during the festival and at Registration on Friday night. Tickets for individual events may be bought at the event (subject to availability).

There was great excitement in County Clare at the official launch of the inaugural Father Ted Festival which took place in Ennistymon, Kilfenora and the surrounding area over the weekend of 13th – 15th May 2011. View the Father Ted Festival 2011 picture gallery.

And in June 2012, Kilfenora hosted the second Father Ted festival, with much merriment at the Lovely Girls competition in particular. Click to see last years picture gallery.

The festival in 2013 was even bigger and better! 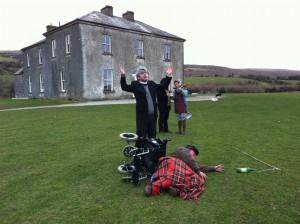 County Clare – particularly around Kilfenora and Ennistimon – provided the sites of many of the iconic scenes of the Father Ted series and this weekend of fun and frolics took people on a journey to these sites, celebrating some of the most memorable scenes from the Father Ted series. This Inaugural Festival was three days of reenactments, partying and recognition of 25 episodes of hilarity which included Tea in the infamous Parochial House.

The official opening was on May 13th 2011 and was followed by the Lovely Girls Competition in Vaughans Bar in Kilfenora, the original venue used when filming the Lovely Girls Competition. MC on that night was the mischief maker Father Damo Lennon, AKA comedian Joe Rooney, who starred as Dougal’s rebellious side kick in the ‘Old Grey Whistle Theft’, episode 4 of series 2.

There was a number of events that took place on Saturday May 14th 2011, including bus tours around the area. The tours departed from the Falls Hotel in Ennistimon and went on a journey to the many locations including tea in the Parochial House and Ted related games in Kilfenora. That night there was the Craggy Island Raffle in the Falls Hotel which included a massive fancy dress party, sit-down meal, raffle and a few surprises.

Sunday May 15th 2011 was the Craggy Island Olympics which took place on the grounds of the Falls Hotel and included Nun Carrying Races. “I’m delighted to be involved in this Festival as the hotel was where the cast and crew stayed during filming each year and the grounds of the hotel were used regularly for various outdoor scenes, the most obvious one ‘My Lovely Horse’”, said Joanne Clancy, Sales & Marketing Manager Falls Hotel.A few local people joined forces to organise the festival and they include, Mark Vaughan from Vaughans Bar Kilfenora, Cheryl & Pat McCormack owners and residents of the Parochial House, Joanne Clancy from the Falls Hotel and John Morgan the man responsible for locating the outdoor locations and props for many of the episodes.